To celebrate the launch of our new Run Forrest Run t-shirt, we’re taking a look at the man behind the beard and chocolates. Arguably the greatest actor alive today, Tom Hanks has acquired an unbelievable list of on-screen performances over the years, and also just happens to be one hell of a wonderful person off-screen too. So let’s highlight just some of Hanks’ greatest times on and off our screens: here are Tom Hanks’ Best Moments. 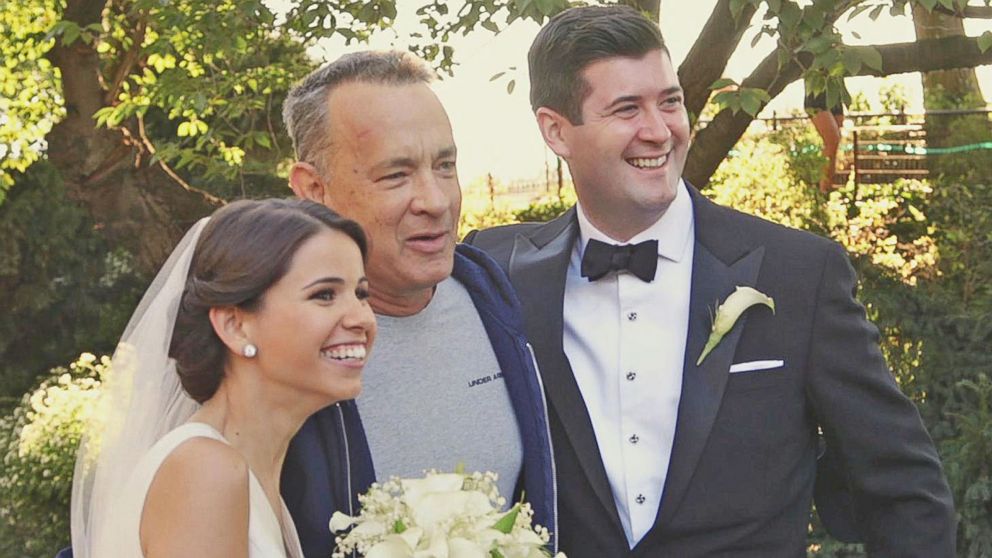 One day, in September 2016, one of the greatest actors alive today was having a casual stroll through Central Park, and noticed a bride and groom celebrating their wedding day. Instead of putting on his dark shades and baseball cap as most a-listers would do to make sure they weren’t in any background shots, Hanks instead (because he is the loveliest person in Hollywood) walked over to the newlyweds, congratulated them and actually asked to take photos with them. What a guy.

His Performance in The Terminal

Possibly the most underrated film Hanks has ever appeared in, The Terminal looks at the fascinating story of Viktor Navorski, a man visiting New York from a fictional Eastern European country that ceases to exist because of a political coup while he was in the air while. As a result, Navorski isn’t legally allowed to enter America until his country is once again recognised by the UN, thus he must live in JFK until that day comes. As well as a unique, interesting premise, the film is full of humour, emotion, love, memorable moments and genuine charm, none of which could be achieved without the lead actor. Nobody could capture Navorski’s clueless, bumbling likeable, his transition from knowing no English to being almost fluent, and his moments of frustration and pure emotion like Hanks does. It is truly a standout role in long list of perfect performances. 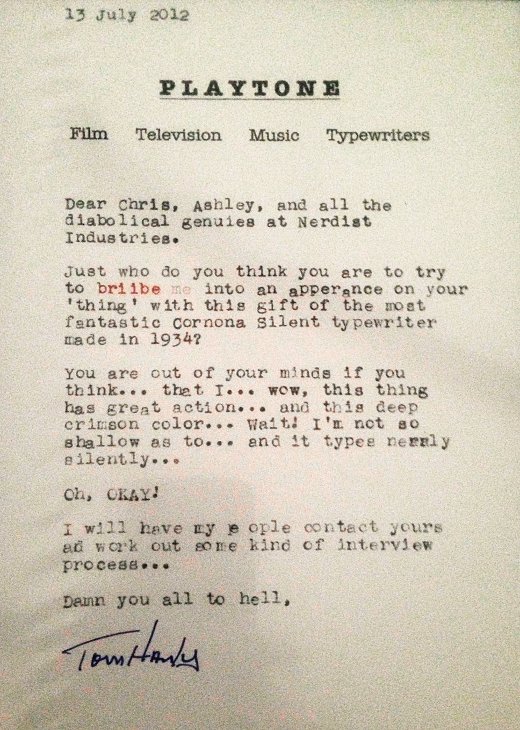 It’s no secret that Tom Hanks loves a good typewriter – he’s even created his own typewriter app as he didn’t believe others on the market felt authentic enough. In 2012, stand-up comedian Chris Hardwick sent Hanks a 1934 Cornona Silent Typewriter in hopes that it would persuade him into appearing on Chris’ Nerdist podcast. Now, members of the a-list don’t usually tend to do podcasts, or any kind of interview that isn’t for a major talk show, yet instead of politely declining, sending the typewriter back, or ignoring Chris completely, Tom replied with this lovely, genius letter, and on October 8th 2012, he kept his promise.

In 2000’s Cast Away, Hanks managed to achieve something incredible – he made a feel completely gripping and compelling for well over an hour with only a volleyball for company. Once Chuck Noland washes up on that desert island, it’s him and only him for the next four years. Now, with nobody else surrounding him, you’d imagine that would make keeping the film entertaining and gripping rather difficult, but not for Hanks. Despite his lack of dialogue, Hanks keeps us all captivated throughout his time alone. And of course, part-way through his time on the island, we meet his new best friend in the whole wide world – Wilson. This bloodstained volleyball becomes Noland’s only companion, and even though he can’t speak a single word, Hanks really gives life to this inanimate object through the way he speaks to him. Then, of course, the inevitable happens, and Wilson gets lost at sea as Noland tries to sail his way back to civilisation, and thus, one of the most surprisingly emotional moments in cinematic history is created. Anybody who can make me care emotionally about a volleyball is one fine actor in my opinion.

We’ve all seen it – nine minutes of pure wonderous entertainment as Tom Hanks (along with James Corden) acts out scenes from his entire filmography. What makes this so magical to watch is the visible look of joy on Tom’s face throughout – a nine-minute, live run through your entire life’s work in front of millions may be a nerve-wracking, or uncomfortable experience for most, but not for Tom, he’s clearly loving every second of it, and that’s why we love him.

Appearing in the First Ever Feature-Length Computer Animated Movie

Although he may not have physically appeared in it, Tom Hanks voiced leading character Woody in 1995’s Toy Story, and became a part of animation history. Being involved in the first of its kind in any field is an achievement, especially when it’s as well-revered and loved as this Pixar classic is. In this iconic voice acting role, Tom became a part of history, and a huge part of many of our childhoods. 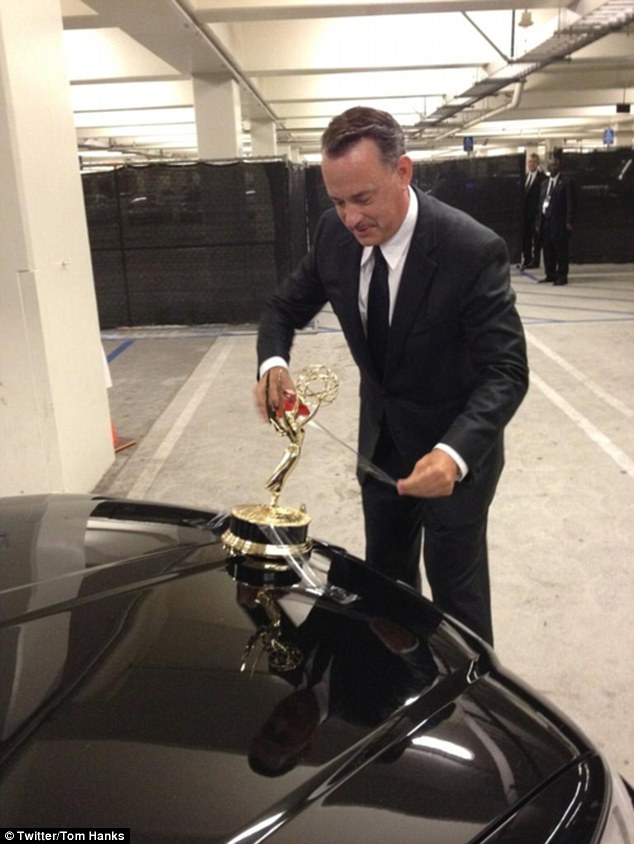 In 2013, Tom Hanks won an Emmy award for producing the HBO political movie, Game Change. So what did he do with such a prized possession? (Or not so prized if you’re asking The Simpsons) Did he put it on his mantle? Maybe inside a trophy case? Nope, he sticky taped it onto the top of his Lincoln car to make it look more like a Rolls Royce. That is a legend right there.

Play us a Tune, Tom

It’s one of the most iconic scenes in movie history – Tom Hanks and Robert Loggia playing Heart and Soul on a gigantic piano in the middle of a toy store straight from a 9 year old’s dreams. It’s charming, childish, and unforgettable.

Tom Hanks on a Swing

Not exactly one his ‘best moments’, but it’s a photo of Tom Hanks having a great time on a swing, and there was no way I wasn’t going to include that.

And of course… Forrest Gump

Forrest Gump is arguably Hanks’ greatest work. He takes you through a man’s life journey, forcing you to feel every emotion imaginable. His portrayal of Gump throughout his extraordinary life is simply perfect, and nobody else could have done it better. Whether he was eating chocolates, getting shot in the buttox in Vietnam, or running just because he felt like it, Forrest took us along on every step of his journey, and thanks to the man behind the beige suit and blue checked shirt, we felt like we were there experiencing it for ourselves. There are plenty of arguments for Tom Hanks being the best actor of all time, and perhaps this iconic role is the strongest of them all.

What’s your favourite movie starring Tom Hanks? Let us know in a comment below or over on Twitter @thebearhugco.